A lot has happened since I last updated the shop. A friend from the weavers guild gave me a floor loom!

It’s a Macomber Add-A-Harness, 40″ weaving width, with four shafts. I plan to upgrade it to eight when I’m able. I started a project on it, but haven’t had time to finish.

Why? Because I got a part-time job at the local yarn store, which just closed last month. My boss, the owner, had been running the shop for 34 years and was ready to retire. So I helped out until the end, and have been getting the leftover products ready to put on eBay and Etsy. I’ll share links when the time comes, as we’ll have some pretty good deals on yarn and needlepoint stuff.

Now that my life is a bit calmer, I plan to resume spinning for the shop, as well as finishing that weaving project. I have some other crafty plans, too, like learning to spin “in hand” for a medieval re-creation, and learning to spin flax. Should be fun! 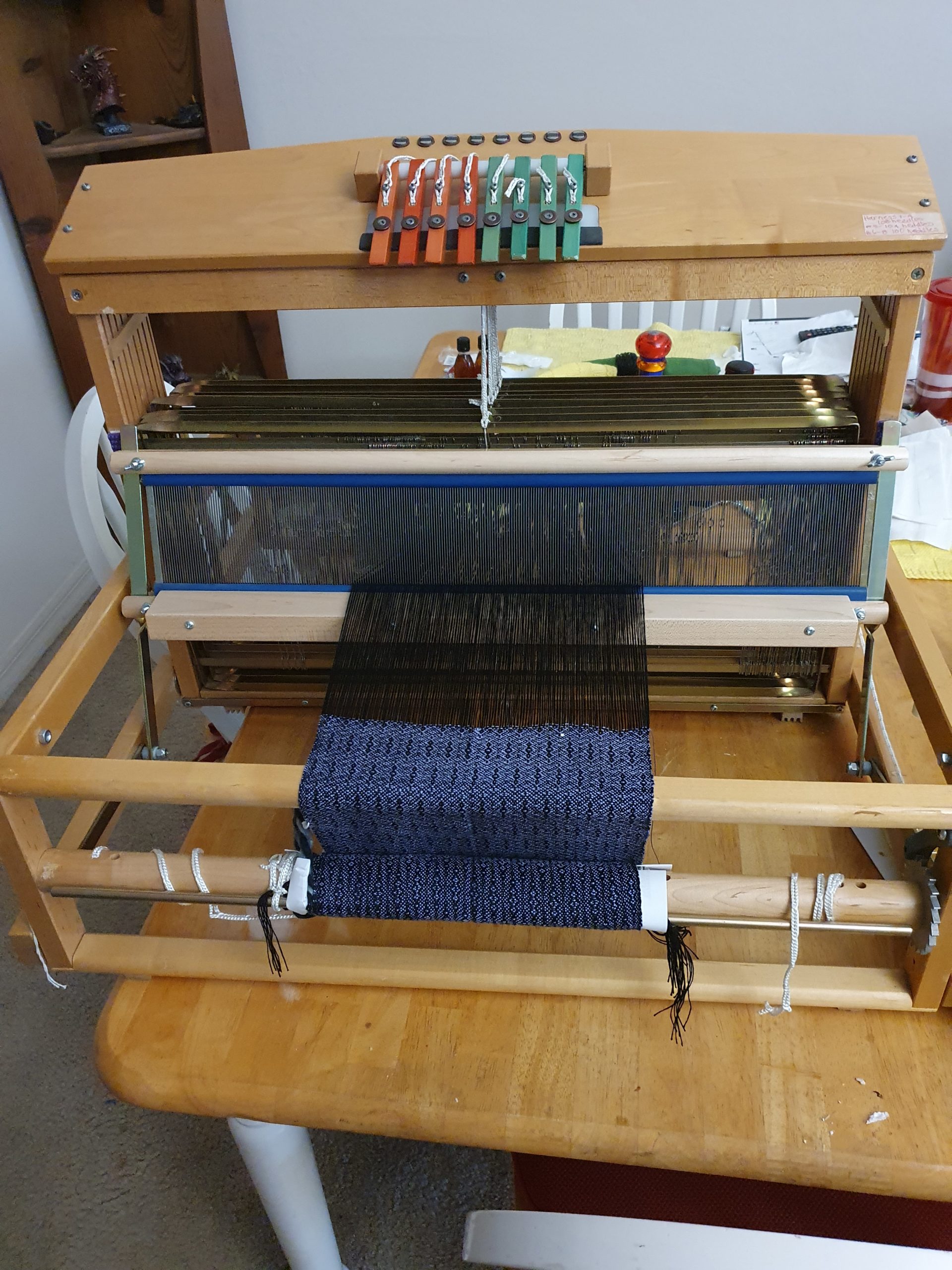 I’m so excited. I just got a new (used) table loom delivered via UPS. It’s a Leclerc Voyageur, 8 shafts, 24.5″ weaving width. It is a thing of beauty, and is in fantastic shape. So I thought I’d do an unboxing post.

When I opened the front door and saw this behemoth, I was surprised at how massive the box was. (I believe my exact words were “Holy fuck,” which made the UPS driver laugh out loud.)

There was a lot of packing material.

But there was a loom in there somewhere, I knew it.

I unwrapped it (and I’m never going to need packing supplies ever again, I don’t think) and put it on the table. The Voyageur is designed as a “workshop” loom — a folding loom that weavers can take with them to weaving classes. I wanted it because it folds up to a narrow enough size I can tuck it in the corner of my bedroom between projects. Most people who buy this model for travel get one of the narrower versions. This sucker is pretty big and weighs thirty pounds.

I opened it up. I had to adjust the shafts and heddles, because they’d shifted some in transit, but nothing was broken. It’s in beautiful shape, actually.

That project you see on it was from the previous owner. It’s a Tencel scarf. The pattern is a 92 row repeat. I haven’t decided if I’m brave enough to continue it.

I won’t get to play with my new toy for a bit, because I have a large spinning commission to finish. But once that’s done, I’ll give the Voyageur a go and see how I do!

Meanwhile, I’m selling my old Louet Erica, a 19″ 4-shaft table loom. I have a prospective buyer lined up and am meeting her tomorrow. And I have a weaving space for this loom, when I have the time for it. I can’t wait.

Oh yeah — and the last owner was a giant Star Trek nerd. Which is why these decals are on the side of the loom. It’s dorky as hell, but I am probably equally dorky for recognizing the outline of the starship Voyager.

A commission client asked me to show pics of how the spinning process goes. I thought I would share with everyone. Please pardon my carpet — this particular fiber got everywhere while I was spinning it.

First off: I spin a singles. Not a typo, the word is plural even when it means a singular thing.

The singles is drafted from the fiber, which I hold in my left hand.

In a two-ply yarn, there are two singles plied together.

The bobbins containing the singles are on the floor to my left, held by a lazy kate.

Once the singles have been plied together, the yarn is done. Here it is on the bobbin.

Then I wind it onto the skeinwinder…

Once it’s wound, I tie it off.

And it’s ready to be washed! Wet-finishing sets the twist and makes the yarn complete. Once it’s dry, it’s off to the client.

This particular commission was for eight pounds of worsted weight yarn. I can’t wait to see what the client makes with it! If you’d like to book a commission, contact me. I charge by the ounce, and cost depends on your desired yarn thickness.

I’ve been spinning a lot lately, and now it’s almost all up in the shop! (I’m working on more, too.) I hope you like the new goodies.

Long time no see, friends! I’ve updated the shop with two mega-skeins of handspun BFL wool. Hope you like them!

I just wanted to update you all on the shop status. I’m currently running low on handspun, and it may take a bit before I have more. I just started back to college, and I don’t have a lot of free time for spinning at the moment.

The best way to keep up with new product updates is through the mailing list. Please subscribe, and you’ll get notified when I do shop updates.

In the meanwhile, I decided to extend the 30% off sale on yarns and handknits until Sept. 30th. Use the code CLOSET30 at checkout.

Hey y’all. I need to pay some bills and get some handspun out of my closet. So for all of August I’m running a sale on my site, 30% off all handspun and handknits with the coupon code CLOSET30 if you want to have a look. Thanks.

For the rest of June and all of July, I’m going to donate half of every sale to Dream Defenders, a Florida-based group of young people working to make the future a better place. And if you know of any black American handspinners with Etsy shops or other online stores, please pass their info along so I can share them on social media. I’d rather you buy from them right now, honestly. Google hasn’t been much help for me in this, so I’m asking you.

I’m going to shut up now, because no one wants to hear another white-passing person talk about race. Go here, and do some good.

I hope you’re doing well, my friends, and staying healthy in these troubling times.  Most of us are worried about the coronavirus. I know I’m taking precautions. So I wanted to let you all know what’s up at SwitchKnits.

All my handspun yarn gets washed in hot water to set the twist. My finished products and mailing supplies are kept in plastic bags.  If I get sick I won’t do any production work or touch my products.  I’d hate to pass anything along to my customers, although the coronovirus dies off surfaces in the time it takes for the mail to reach you (according to current CDC thoughts about the virus’ lifespan; this may change, so keep up on your news).

I will continue to mail out orders, unless the post office closes or I’m under quarantine, in which case I’ll let you know. (I’ll also post a site-wide notice about it.) If your order is delayed, you’ll have the choice of a refund or waiting until I can mail your package (which will be done as soon as possible).

Etsy has decided to start charging a 15% fee on products sold through ads. Ugh. I may get less customers keeping the shop on my own webhost, but I’d rather that than let Etsy continue to have my business. If you see other makers leaving Etsy, make sure to get on their mailing lists so you don’t lose touch with them. I’m not the only one affected by this, and most makers don’t have the technical expertise to run their own site…